By Tyna
Travel and History

The fantasies of most children start with building a castle out of sand or clay on the playground, making sure it’s firm and has some glamour. Different castles that are a reality have the same peculiarities and serve their different purposes, hence their varying architecture. Visiting a continent like Africa, many of these beautiful ancient castles got history and unique beauty that are unmatched.

The African continent is incredibly diverse with hidden gems at nearly every corner. It is home to many ancient and complex societies, cultures, identities, beautiful nature, and history that have thrived over the course of hundreds of years. Ancient castles existed in these societies and they have stood the test of time – from wars and famines to floods and bush fires. Here’s a rundown of some of the amazing castles that still exist today in Africa. Fort Christansborg, also called Osu Castle, was built by Dutch merchant Henry Caerlof in 1652. Ownership of the castle has changed hands from Denmark-Norway to Portugal, the Akwamu tribe of Ghana, the British, and then the independent Ghanaian government. It is strategically situated at the intersection of important inland and transatlantic trade routes. The structure has been rebuilt many times and has served different purposes throughout history. In addition to having served as the seat of government, it has been used as a constabulary mess and a psychiatric asylum.

With Ghana’s independence from Britain in 1957, Fort Christiansborg Castle was renamed Ghana’s Government House. The castle served as the seat of the Ghanaian government from Kwame Nkrumah‘s time down to President Flt. Lt. Jerry John Rawlings. In 2009, however, President Kuffour decided to move the seat of government into Flagstaff House, what is now known as Jubilee House.

Presently, Fort Christianborg is not open to the public and photography is limited, but it retains interesting features in an unusually shaped building that includes a clinic, café, and shopping center while the surrounding grounds are home to a variety of exotic birds. Located on the coast of the Mediterranean sea on the eastern side of the northern tip of Pharos Island at the mouth of the Eastern Harbour, the Citadel of Qaitbay in Alexandria, Egypt is a defensive fortress considered to be one of the most important defensive strongholds in the region. It was the most important piece of the fortification system of Alexandria in the 15th century AD, guarding the city against the crusaders and Turks among other threats.

The Citadel of Qaitbay in Alexandria was constructed on the ruins of the famous Lighthouse of Alexandria, one of the Seven Wonders of the Ancient World. The ancient lighthouse was constructed in the 3rd century but after several disasters that occurred in the 11th and 14th centuries, it was destroyed.

Circassian Sultan Qaitbay whose reign began in the late 15th century (1468 AD) had a huge interest in art and architecture. When he visited the old lighthouse in 1477 AD, he ordered a fortress to be built on its foundations. Construction lasted about 2 years and cost more than a hundred thousand gold dinars. Qaitbay is considered to be the most important builders of this period as he oversaw the construction of many monuments around Egypt, including the Madrassa and the funerary complex in Cairo.

Although the Citadel of Qaitbay holds no serious function in our recent time, it still exists and serves as a tourist attraction. Fort of Santa Cruz is one of the three forts in Oran, the second largest port city of Algeria. The other two forts are Fort de la Moune at the western end of the port and Fort Saint-Philippe, a replacement of the old castle of the Saints. The castle at the heart of Fort Santa Cruz is protected by 2.5 kilometers of wall built by the Spanish in the 16th century to replace an Ottoman fort they destroyed in the same location.

Built 1300 feet above the sea at the top of Mount Murdjadjo, Fort Santa Cruz has repeatedly been damaged by invading armies and earthquakes. But three centuries later, the French tried to remodify it to what it is today. The castle is now a listed national monument and a testimony of Algerian-French-Spanish history.

To access the premises, visitors will ride a cable car or drive a very steep road. At the top, you can take in a 360° view of Oran’s bay, Mers-El-Kebir’s bay, and the entire city. You can also admire the Santa Cruz chapel and its ivory dome, erected during the outbreak of cholera in the late 19th century. The chapel has a y,Virgin Mary statue, a replica of Lyon’s Notre-Dame de Fourvière. 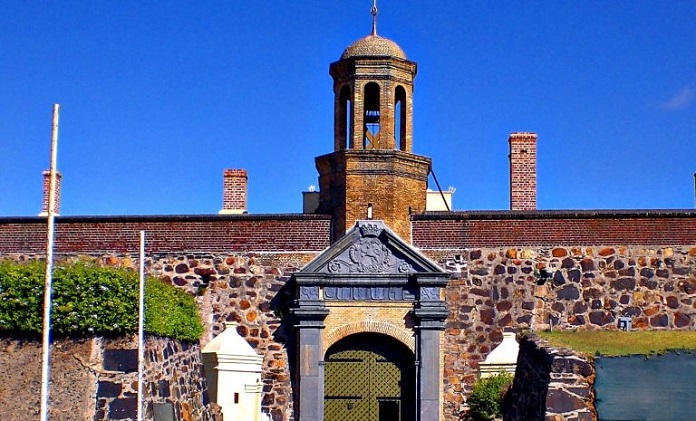 Originally made from clay and wood, the Castle of Good Hope is the oldest existing colonial building in South Africa. Commissioned by the Dutch East Indian Company, the Castle was built by Khoikhoi slaves amongst others in the late 17th century. At that time, it was home to free burghers (free citizens) and slaves. It also served as a lodge for visitors traveling to the East Indies.

Having served as the seat of government and military operations for two centuries, the ancient castle is now known as home to South Africa’s Military Museum where you could find an impressive display of 17th to 19th-century military artifacts. Elmina Castle is a White Castle that sits on the coast of the small town of Elmina, Ghana. It is the first prefabricated building of European origin to have been planned and executed in Sub-Saharan Africa. The Portuguese built this castle in 1482 and made it a trading settlement, dealing mainly in gold. Elmina Castle later became one of the most important stops on the route of the Atlantic slave trade, and this lasted for over three centuries as control of the castle passed on from the Portuguese to the Dutch and later Great Britain.

Ghana took control of the castle after its independence. It was then extensively restored by the Ghanaian government and now serves as a major tourist attraction. The edifice is also recognized by UNESCO as a World Heritage Site. These emperors amongst others travel around moving their camps but King Fasil (Fasilidas) settled in Gondar and established it as a permanent capital in 1636. Fasil Ghebbi shows an incredible interface between different religions. After the Castle’s decline in the 19th Century, Gondar served as a commercial facility mainly for travelers and visitors. It serves this purpose till today. Inside the castle is a single long hall, which “the usual arched windows and doorways provided light and access”. As of 2002, Dawit’s Hall lacks a roof. The site was in 1979 engraved as a UNESCO World Heritage Site. The Citadel of Saladin, known in English as the Cairo Citadel, is one of the world’s greatest monuments of medieval warfare. The castle is located on a promontory beneath the Mokattam Mountain which made it very hard to attack. Its beauty lies in its architectural artistry following its purpose.

One of the citadel’s historically unforgettable features is a relief depicting an Egyptian vulture that can be seen on its western wall. Although headless today, it is believed to have originally been a double-headed eagle. The eagle was later redesigned and used as a national symbol after the Egyptian revolution of 1952 and is still used as Egypt’s official coat of arms.

The Citadel of Saladin was mainly used as a military barricade or defense. In 1983, it became a UNESCO World Heritage Site and was opened to visitors. Duwisib Castle is one of the most exceptional structures that is located in the southern parts of Namibia, somewhere in the middle of deserts and farmlands. Captain Hans Heinrich von Wolf and his wife, Jayta Humphreys, acquired 55,000 hectares of land and used it for horse farming. Building the castle on the property commenced in 1908 and imported German stones by the hands of European stonemasons were used for the construction.

The inauguration of the 22 roomed castle was attended by dignitaries in the southwestern part of Africa. Jayta never returned to Africa after her husband died in the first world war. The beautiful structure transferred ownership over the years but is now under the management of the Namibian Wildlife Resort. The ancient castle is constantly flooded with tourists and travelers and the castle serves as a resting place for visitors who wish to stay in a refurbished bedroom. 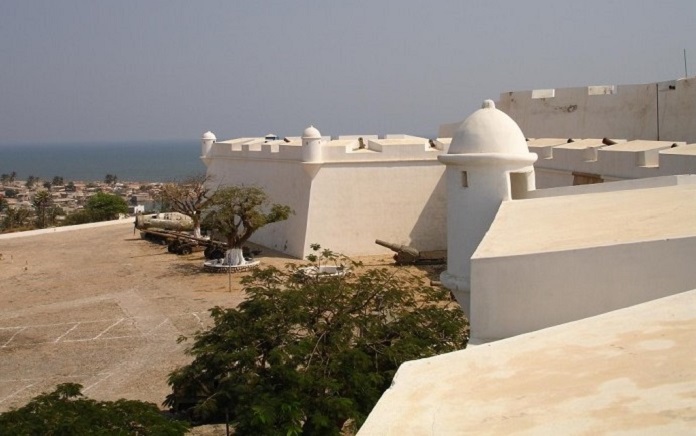 The Fortress of Sao Miguel was more of a city well-guarded by its thick walls that were infused with canons. The beauty of this fort is how each part tells a story, from the ceramic tiling to the courtyard which holds a very large statue of the first European to reach Angola, Portugal’s first king, and renowned explorer Vasco da Gama among other notables.

Fortress of São Miguel was the first defensive edification built in Angola, and Paulo Dias de Novais, the first Captain-Governor of Portuguese Angola, oversaw its construction. It served as the administrative center of the Portuguese colony and was a major outlet for slave traffic to Brazil.

Despite a brief occupation by the Dutch in 1641 CE, the fort has suffered only a little damage over the years. The fortress was also the headquarters of the Commander-in-Chief of the Portuguese Armed Forces in Angola till the year 1975. In the present day, it is home to the museum of the armed forces and the country’s Ministry of Defence and Culture is responsible for its maintenance and preservation. 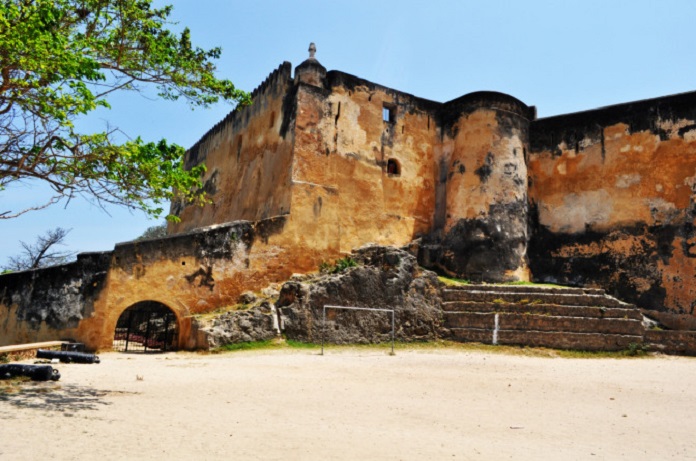 Popularly known as Kenya’s Portuguese Fortress, this ancient castle was built on the coastline near Old Town Mombasa towards the end of the 16th century (1593-1596). The Portuguese built the fort to protect the town from invaders. The fort’s location makes it possible for the people of the land to see any ship as it approached.

Between the 17th and 19th centuries, Fort Jesus was captured at least nine separate times. By the early 20th century, the British had gained total control of the fort and used it as a prison until the late 1950s when the Kenyan government took over and turned it into a historical site. Today, the fort has grown to become one of the most visited areas in Mombasa and has been declared a World Heritage Site by UNESCO.

2. The Citadel of Qaitbay