Does Emilia Clarke Have A Boyfriend Or Husband? What Is Her Height?

There is a whole lot more to Emilia Clarke other than her somber and unyielding looking character, ‘Daenerys Targaryen’ in the HBO series, Game of Thrones. Acting has always been a childhood dream for the actress and like many of her counterparts, she is truly and happily living her dream. Who would have thought that Emilia Clarke who started out with stage plays would end up becoming one of Hollywood’s A-list actresses? Here are other facts you need to know about her.

She was born on October 23, 1986, in London. Emilia Clarke was raised by her father, a theatre sound engineer and her mother who is into business, in Berkshire. Emilia’s show passion started at an early age of 3 after her mother took her along to the theatre production of ‘Show Boat’ which her father was working on. Thanks to her parents who helped her nurture her dreams, Emilia started acting small plays while at St. Edward school of Oxford. After her high school, she enrolled into Drama Centre London, where her skills were further shaped as she featured in many plays.

It was time to fully venture into her area of interest and Emilia scouted for small roles. She finally landed a role in the 2010 movie Triassic Attack. It was just the beginning for Emilia whose big break came the following year when she was cast in the epic hit series ‘Game of Thrones’, as the mother of dragons, ‘Daenerys Targaryen’. She was cast as a replacement for Tamzin Merchant, who left the show after the filming of the unaired pilot. 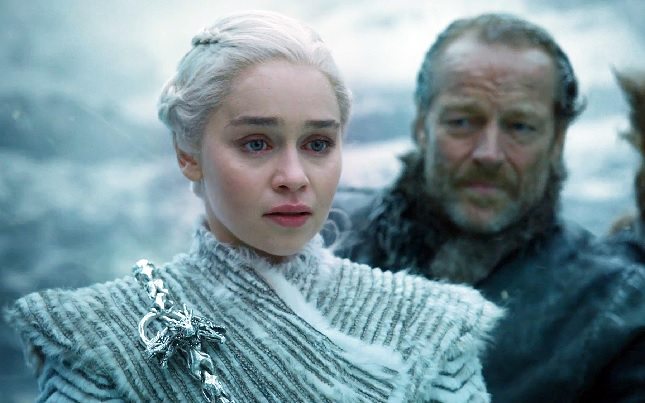 Her impressive interpretation of the role in the movie pushed Clarke into the prestigious cadre of Hollywood’s leading actresses. Moreso, her role in the movie also won her lots of accolades including the 2011 Emmy Award for Best Supporting Actress in a Drama. She has also received several nominations from the Screen Actors Guild nominations. Emilia Clarke rose to high prominence after Game of Thrones and started getting more significant roles. The actress who started appearing on Broadway played the character Holly Golightly in “Breakfast at Tiffany’s” in 2013. She also played a major role in Terminator Genisys (2015) alongside Arnold Schwarzenegger, as Sarah Conor.  Clarke featured in the 2018 Star Wars film Solo: A Star Wars Story.

See Also: Top 10 British Actresses Who Are Still On Top Of Their Game

Who Are Her Brother and Family Members?

Emilia Clarke came from a very small family of four – herself, her parents and her brother. She is a big sister to her younger brother whose name is not known. Her brother studied politics and some sources have reported that he is practising his field of study though it has not been ascertained if he is a popular figure in international politics.

Does She Have A Boyfriend or Husband?

Some sources had reported that the actress is a married woman. This was owing to the fact that she appears reserved not just in her movies but in real life. But Clarke at the moment is not married to anyone and has no kids.

Emilia Clarke has quite an interesting personal life which is hardly personal to her given her raunchy scenes on the hit series Game of Thrones. From linking her with on-screen first love, Jason Momoa to second love, Kit Harrington (Jon Snow), Clarke has been on the hot list of celebrity pairs, constantly made by the curious media. But here are the real facts. The talented actress was in a relationship with Seth MacFarlane, a comedian. The pair who started dating in 2012 lasted romantically for just a year but are still good friends. Their relationship was short-spanned as a result of Clark’s massive prominence in 2011 which drew overwhelming attention to her relationship. There were rumors that she was involved with James Franco. There are also rumors that Clarke has also dated Jai Courtney, her co-star in ‘Terminator Genisys’.

Details Of Her Height and Weight

Emilia Clarke appears to have been specially moulded for her profession. She not only has the right body, but she also carries it with so much poise and charisma. Landing the Mother of Dragons role in Game of Thrones came with its own challenges which included keeping a good shape and maintaining good stamina. Over the years, Clarke worked so hard to pull off a sizzling hot and stable look for her demanding role. Achieving this look is no piece of cake, Clarke has had to train over the years with her trainer who relentlessly helps her keep her in good shape and stamina.

Emilia who stands at a height of 5ft 2 inches has a slim and portable body which weighs 58 kg. She has got the perfect green eyes placed on her fluffy face, giving her a bright smile a unique glow.

Other Facts You Need to Know

For most of her nude and sex scenes in Game of Thrones, Emilia Clarke confessed that it was all her and not a body double. Emilia who went nude for her sex scenes cannot be more defensive over her nudity. She does not apologize for the scenes and is instead, proud of her strength and ability to conquer in a society filled with toxicity. This is quite ironical as reports have it that she once turned down the role of Anastasia Steel in 50 Shades of Grey because of nudity.

She was working up to five different odd jobs before she landed her major role. Clarke who was given a 24-hour prior notification had to call in sick at her catering job to prepare for her ‘GOT’ audition.

She is very good with jazz singing and also enjoys cabaret singing. She also has other sports interest which include running, horse riding, and ice skating.