Margaret Kenyatta is one of Kenya’s first ladies that will not be forgotten in a hurry. She is the wife of Uhuru Muigai Kenyatta, the fourth President of the Republic of Kenya.

As subtle as she is in discharging her duties, she commands a great deal of respect in the country. Many have described her as the powerhouse of Uhuru Kenyatta who was recently inaugurated for the 3rd consecutive time as Kenyan president. She is the 3rd Kenyan first lady, after Lucy Kibaki and Ngina Kenyatta and the 2nd first lady from the Kenyatta family.

You’ll get to know more about the much-loved Kenyan first lady in this article. We’ll also bring to light her parents, children, and other interesting facts that are relatively unknown.

Margaret Gakuo Kenyatta was born Margaret Wanjiru Gakuo on April 8, 1964. Her father, Dr Ephantus Njuguna Gakuo worked for a long time in the development of Kenyan Railways and was the first African managing director of Kenya Railways after taking over from GPG Mackay in 1964.

Prior to his committed services to the Railways, he lectured for three years at Delhi University. Dr Gakuo obtained his BA and MA degrees in Commerce from the Delhi School of Business in 1955. He obtained a PhD in Economics from Freiberg University in 1960.

Dr Gakuo taught for a year in Germany before returning to his home country – not just with his doctorate degree but also with a German wife – Magdallena – who would become the mother of Margaret and his brother, Maina Gakuo. Margaret lost her father in 2005.

Margaret Kenyatta is an alumnus of Kianda School, St. Andrews School (an elite school in Molo), Turi and Kenyatta University.

Margaret is just a simple but powerful personality whose skills and charisma are tagged the secret ingredients for Uhuru’s successful campaigns. The most striking characteristics of Margaret is her down to earth and simple personality.

Uhuru and Margaret Kenyatta were high school friends who later became a couple in 1989. In a live chat on his official Facebook page, Uhuru revealed while answering questions from Kenyans, that he first met Margaret through her older brother Maina Gakuo.

They later started off a relationship and finally got married in 1991, at Holy Family Basilica in Nairobi. From 2013 to date, they have been Kenya’s first family. 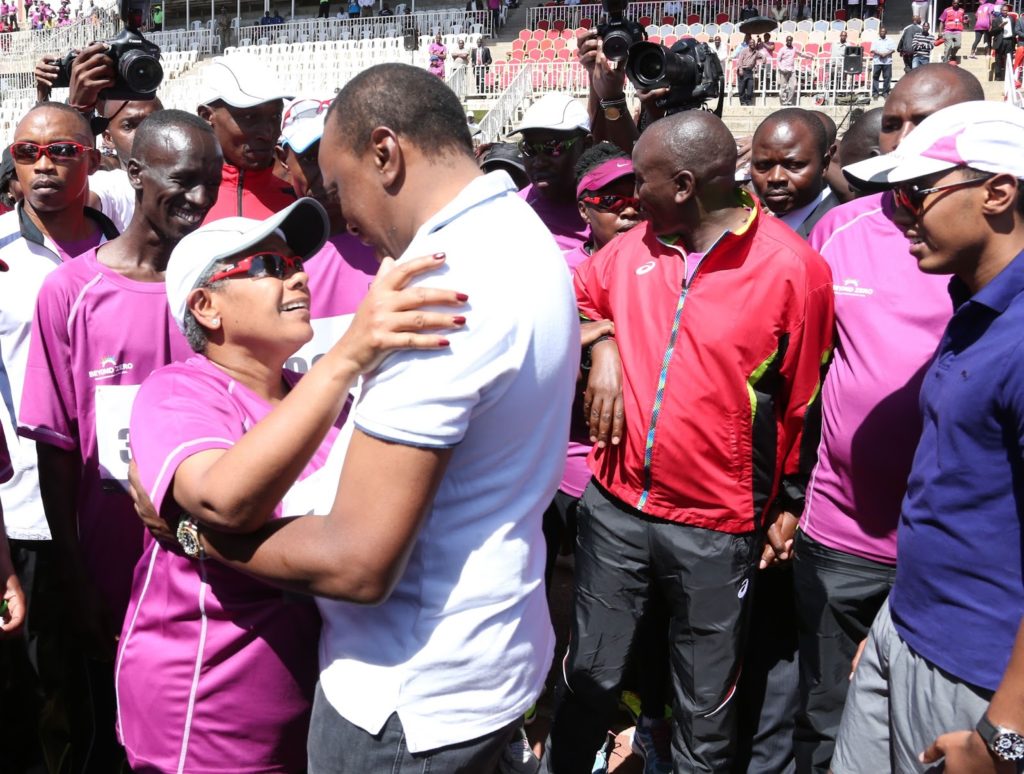 Margaret’s first child with Uhuru, Jomo, is married to his long-time girlfriend Fiona Achola Ngobi, the beautiful granddaughter of the late Luo political giant, Dr William Odongo Omamo. She is of Luo, Kikuyu and Ugandan ancestry and works as an accountant at a local bank.

He had his education at Hilton College and Michael House in KwaZulu Natal Midlands in South Africa.

Uhuru’s second son, Jaba Muhoho has his own clothing line in major towns in some African countries. Like his mother, he has a very special fashion sense that helped him win the 2014 Showcase Designer of the Year award in the Emerging Designer category during the Nairobi Expo.

Margaret’s only daughter Ngina was named after her paternal grandmother, Mama Ngina Kenyatta. She has a degree in international relations and politics but serves as the director of the Kenyatta Foundation.

She’s already following in her father’s steps as she’s often spotted together with him. Ngina also loves partying and spending with her friends and cousins.

Check Out: Kenya Flag: Its Meaning, Colors, Designer and Symbolism of Its Elements

A supportive mother and wife to President Uhuru Kenya, Margaret accompanied her husband to Hague when he was facing the charges against humanity after 2007/2008 post-election violence. This move earned her admiration from many Kenyans and Uhuru’s supporters around the world.