5 Skinniest People in the World We are living in an era where women try to out skinny each other to look hot. The irking size zero trend has turned out to be an obsession among many women, especially celebrities. So, what’s so special about being anorexic? Is it a plan to save food for the future generation? But since there’s no record of being extra skinny for this reason, then that might not be the case? Well! Before we start criticising the excessive shedding of weight, we should first understand that not all cases of anorexia are deliberate. Some are triggered by special conditions like we are yet to find out. Here is the list of 5 skinniest people in the world for you to read: 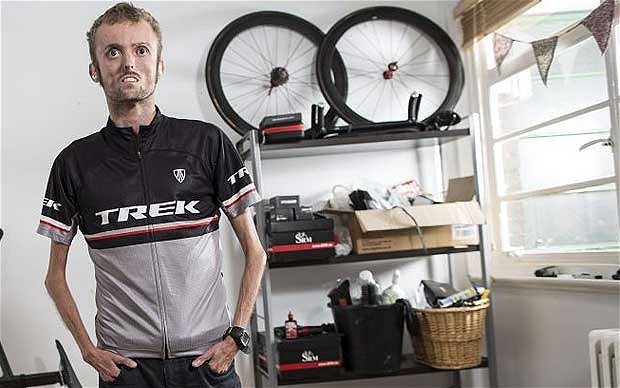 Tom Staniford is a professional cyclist whose skinny condition is as a result of a rare condition which prevents his body from storing fat. Tom, who was born on 1 July 1989, a British citizen, is one out of the eight people in the world that are suffering from MDP syndrome. The cause of this rare condition was a mystery to doctors until recently when doctors came up with a meticulous explanation of what might be the real cause of the condition. But still, the condition cannot be treated.

At over 25 years, with a height of six-feet-three, Tom weighs about 66 pounds. The condition has, however, not succeeded in holding back his dreams. He leads a perfectly normal life — both professional and personal life. And he’s married to Alice, whom he claims has been his greatest supporter in life and the greatest source of his inspiration.

Loana Spangenberg’s is a Romanian model whose skinny condition is considered natural and not as a result of dietary starvation as claimed. During most of her interviews, she’s quick to dispute the rumours about her anorexic condition being spurred by starvation. She even goes a step further to explain how she has been trying to put on some weight by eating a three-square-meal per day that consists of kebab, pizza and crisps.

Loan Spangenberg has a 20 inch ( 50 cm) waist — 5 inches bigger than a CD’s circumference. She has been nicknamed by the public as the human hour-glass because of her 32-20-32 figure. She’s 5ft-6 in tall and weighs about 84 lbs. The exact cause of her anorexic condition is not known, but some health experts have been quick to link it with fast metabolism.

Cathie Jung, born in 1937, is an American corset and dress enthusiast who holds the Guinness-World-Record as the person with the smallest waist to ever live. She’s 5 ft 6 in tall and has a 15-inch waist (38.1 cm). She nicknamed herself as “the queen of corset” after she was featured in the revised edition of the Guinness-Book-of-World-Records.

Read Also: Caleb Mutombo: Everything You Should Know About The Congolese Body Builder

Cathie Jung’s tiny waist was as a result of her consistent wearing of corsets. According to her, she first wore a corset during her wedding in 1959 and has been wearing it ever since. In fact, she wears it for 24 hours a day. She’s now 70 years old and weighs about 43 kg, and still retains the record of the woman with the smallest waist.

Born on 13th March 1989, Lizzie Velásquez is currently one of the skinniest people in the entire universe. She only weighs 58 lbs (26 kg), and she’s required to eat after every fifteen minutes to survive. She, therefore, takes between 5000 to 8000 calories per day. Despite her condition, Lizzie is a renowned motivational speaker and author and has so far managed to attend over 200 workshops since she was 17.

Her skinny condition is triggered by an extremely rare condition known as Neonatal Progeroid Syndrome (NPS). She’s one out of the three people who are affected by the condition. This condition is also known for causing premature ageing — just like progeria. She now looks older than a normal person in her mid-twenties.

Valeria Levitin is the world’s skinniest woman. The anorexic woman from Monaco weighs as little as 50lbs about 27kg — half of what the lightest person should weigh. She’s 5 ft 8 in tall, and she is one of the skinniest people who suffer from extreme cases of anorexia. She started experiencing her condition years after she embarked on extreme dieting. And all her desperate effort to regain back her lost weight has been futile.
Valeria has been a source of inspiration to young girls who are eager to learn from her mistakes to stay safe from the condition. She has been touring different parts of the world to warn girls of the dangers of extreme dieting. She hopes to recover from the condition someday so that she can full-fill her dream of becoming a mother.