Inside Tameka Cottle’s Marriage to Tiny, Her Success With Xscape and Other TV Works

The name ‘Tiny’ is one that always rings a bell in the showbiz circle. Firstly, for being a part of the girls’ R&B voice group – Xscape, and for the drama that stems from her marriage to T.I. and their reality TV show. Real name Tameka Cottle, Tiny is a talented singer and a brilliant songwriter who has received a Grammy Award and several accolades for the hit song by TLC titled No Scrubs which she contributed to the writing of the lyrics. Her rise to fame came in the 1990s as a part of the four-person R&B group Xscape where she had several hit singles and won various awards alongside her group mates.

Tameka joined the quartet group Xscape in 1992 while she attended a Performing Arts High School in Tri-Cities. The group was discovered when they got the chance to perform at music producer Jermaine Dupri’s birthday party in Atlanta. They made a lasting impression with their performance which led Dupri to sign them on to his then newly-established record label – So So Def Recordings.

Being a brilliant songwriter, Tameka Cottle contributed various songs to three of their platinum albums. Her contributions include Off the Hook, Trace of My Lipstick, and Hummin’ Comin’ at ‘Cha. With the group, she won several awards and accolades including 2 Soul Train Music Awards in the category of Best New R&B Artist and Best R&B Album and A-Town Music Award. She sang lead in six of their hit singles, her voice was quite audible in Understanding, Love’s a Funny Thing, All I Need, Am I Dreamin, My Little Secret, as well as Do You Want To? Tameka equally recorded soundtracks of movies including Soul Food, Love Jones, Bad Boys, and Panther.

Sadly, the group parted ways in 1998 after their third album Traces of My Lipstick hit the music stand. The truth about what led to the group’s disbandment remained shrouded to date, but at that time, rumors ran rife about some internal strife among the members of Xscape. According to the speculations, Tameka and Kandi were trying to kick another band member, Tamika Scott off the group because she got pregnant.

Tameka and fellow bandmate – Kandi Buruss received a Grammy Award for Best R&B Song in 2000 for writing No Scrubs which became a hit song for TLC. She also won two American Society of Composers, Authors, and Publishers Awards for No Scrubs and No Pigeons in the R&B/Pop Music and Rap categories.

Tameka Cottle did not achieve all the feats alone, the celebrated musician has embarked on many viable collaborations in the past. She has worked hand in hand with exceptional popular musicians like Lil’ Kim, T.I., Bow Wow, and 8Ball & MJG. She also has writing credits on Ed Sheeran’s Shape of You.

After Xscape Re-grouped in 2005, Tameka Cottle Launched a Musical Trio Called OMG Girlz With Her Daughter – Zonnique and Kiesha Miles

After taking a protracted hiatus, Xscape made a comeback in 2005 with most of the old members including the sisters LaTocha and Tamika Scott plus an additional member – Kiesha Miles. The new Xscape released an album titled Unchained, followed by their single What’s Up all of which came to light the same year.

Alongside her daughter, Zonnique, Cottle and Kiesha Miles formed a musical trio that got busy with a project called the OMG Girlz. Tameka’s reality series Tiny and Toya debuted on BET in June 2009. With her family and the OMG Girlz, she made an appearance on the set of rapper T.I.’s video for Hello.

After being away from the music scene for a long while, the Georgian native made her comeback to the music industry on the 22nd of July 2014. Tameka Cottle returned under her new label Pretty Hustle through which she released her debut solo single called What The Fuck You Gon Do? The single was a huge success, hitting the #5 spot on the iTunes R&B/Soul charts within five hours of its release. The song still went on to hit the #1 spot on the charts for the genre in less than 24 hours after release.

The female artist has made her mark on the music scene both as a member of Xscape and as a solo performer. Her past collaborations have also contributed to her fame. Recently in 2018, Tiny Harris took a break from her XSCAP3 EP Promo to spend some quality time with daughter, Heiress.

Tameka Cottle Has Been The Wife Of Rapper T.I. Since 2010

Tameka Cottle has not had much privacy in her private life, especially since she started a relationship with rapper T.I whose real name is Clifford Joseph Harris Jr. According to reports, the celebrity duo has been together since 2001and after nine successful years as an item, they decided to take things to the ultimate conclusion. They exchanged marriage vows on the 30th of July 2010; their wedding ceremony was hosted in Miami Beach, Florida.

Tameka and her family are involved in several reality TV Shows. One of them is the T.I. & Tiny: The Family Hustle that chronicles the happenings in their family. The show which never fails to keep the audience entertained premiered on VH1in December 2011. Another series titled Tiny and Shekinah’s Weave Trip follows Tameka and Shekinah Anderson (her best friend) across the country in a mobile salon. In addition to Family Hustle, Tiny produces a couple of other TV shows, Tiny and Toya, and her new baby, Tiny Tonight on VH1. 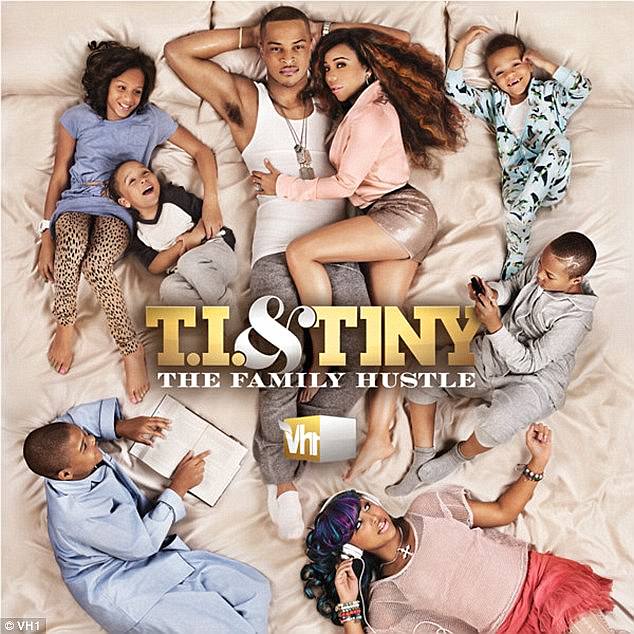 The Duo Already Shared Two Kids Prior To Their Wedding

Before their marriage in 2010, the celebrity duo was already parents with 2 sons (King Harris, born on the 25th of August 2004 and Major Philant Harris, born on the 16th of May 2008). Six years after exchanging marriage vows, they had their daughter – Heiress Diana Harris in 2016. It is important to note that they would have had their first daughter in 2007 but she was stillborn.

Tameka Cottle has an older daughter – Zonnique (who is her look-alike) from a previous relationship with Zonnie Pullins. Zonnique is all grown up and following in the mother’s footsteps as a music artist. Just like Tiny, her husband T.I., also came into the marriage with three children who are now Tameka‘s stepchildren – Clifford Harris Jr., Messiah, Domani, and Deyjah Harris.

The Couple’s Marriage Has Been Quite Tumultuous

Just like so many other celebrity couples, Tameka, and T.I. has been experiencing many challenges in their relationship, thus her union with the rapper has been rocky with several ons and offs. Their matrimonial issues led her to file for a divorce at the Superior Court Of Henry County in the state of Georgia in December 2016; this development came after six years of their marriage union.

Upon obtaining the court documents, ET revealed that Tameka said the marriage was irretrievably broken with no hope of reconciliation. However, the duo seems to have settled down now as she later revealed that the divorce was off and they are working on healing their relationship and marriage. When the Georgian native made an appearance on The Wendy Williams Show, Tameka Cottle was quick to agree that their family reality show put a strain on their relationship and she just had to file for a divorce when she was convinced that things were not just working out for them, but it is all in the past now.

From "Johnny" to "True Love", Nigerian singer and songwriter Yemi Alade has been on an astronomical rise since she made her debut as a...
Read more
Musicians

Kenyan rapper Khaligraph Jones is estimated to have a net worth of Ksh 10.7 million (around $100,000). This impressive net worth has made him...
Read more
Musicians

Is Priddy Ugly The Same Age As His Wife Bontle Modiselle? – Fun Facts About Their Love Story

Priddy Ugly is one of the relatively new faces that have come to stay in the music space of the South African entertainment industry...
Read more
Musicians

Okyeame Kwame is an A-list rapper who has made a name for himself in the Ghanaian Music industry. Popularly known as Rap Doctor, he...
Read more
Musicians

Octopizzo’s Net Worth: How The Music Artist Makes And Spends His Money

It goes without saying that people who have seen the hard part of life and struggled to survive, appreciate better when they come into...
Read more
Musicians

Africa as a continent has provided a fair play ground for its talented citizens who want to excel in both the sports and entertainment...
Read more
© AnswersAfrica.com 2021.
All rights reserved.