What Do You Know About Benin Bronze Figures? Benin was an important empire in the history of Nigeria because it rose to international fame for its artworks (Benin Bronze) which were exported to different parts of Europe and the rest of the world. It was also the first Nigerian territory that rivaled any contemporary European power in terms of governance and function.

Benin Bronze figures which served as royal ornaments are the indigenous cultural art of the Benin people in Edo State, Nigeria, dating back to as far as the 13th, 15th & 16th centuries. Bronze casting in Edo was established in the 14th century by Oba Oguola. It was referred to as “Court Art” hence ”Court Art of Benin” because it was only commissioned and used for royal affairs, though technically speaking, they are all brass.

While producing their works, the Benin craftsmen paid more attention to the Oba, his royal apparel, his slaves, his warriors and the numerous ceremonies held in the Oba’s palace.

See Also: 5 Cultural Marvels By Africans That Other People Get Credit For

Even though the Oba could give his subjects gifts of bronze, the metal was considered to be precious and therefore, could only be possed by the Oba (King) who had some super talented men responsible for producing bronze, wood, and ivory works as bronze smiths, wood and ivory carvers. The bronze-smiths were allowed to manufacture their works only for the Oba and were forbidden from either producing their art pieces for anyone outside the palace or trading it. Going contrary to this attracted a death penalty. However, in 1914, Oba Eweka II lifted the ban on the sale of bronze artworks to members of the public.

The ancient bronze casters of Benin served an important capacity for the royalty. They could be described as the royal photographers and historians who documented important images and events for the Oba of Benin. Through bronze casting, the casters could also relay/share coded messages to the Oba. 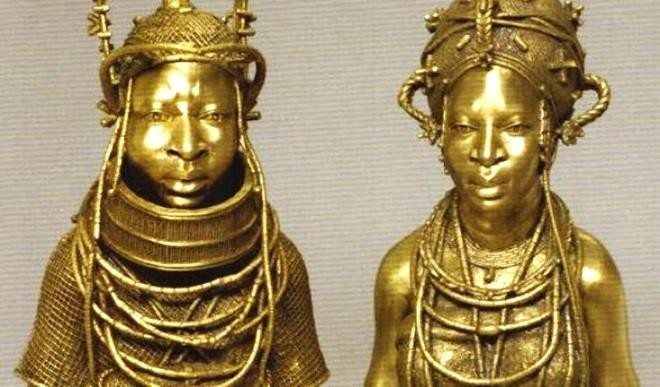 According to Benin oral tradition, the Kings were the center force in Benin Artworks and therefore, determined the kind of figures to be produced by the craftsmen. Sculptures like the ceremonial stools, terracotta heads, and swords were common in the early dynasty of kings called Ogisos, who possibly ruled before the 14th century, but in the dispensation of Oranmiyan, he introduced horses to Benin which is presented in the Benin Art as a warrior on a horseback. Figures of these horse warriors were kept on ancestral altars.

Upon their arrival in Benin City, the British forces were shocked to find large quantities of cast brass objects and because the technological sophistication and naturalness of these artworks were contrary to the numerous 19th-century Western suppositions about Africa, the bronze works were wrongly believed to have been brought into Benin by the Portuguese. This probably emanates from the fact that the first white people who came to Benin were the Portuguese missionaries who under the direction of Prince Henry the Navigator, undertook the exploration of West African coast in the 15th century. It is also a historical fact that Benin was one of the first missionary outposts in West Africa when the European commerce kicked off and until about 1530, the Portuguese were the only Europeans that dominated West Africa as a whole. Thus, some of the Benin signature head bronze works were representations of the Portuguese sailors as a result of their activities and early contact with the people of Benin and also because they were buying the Benin Art.

Unfortunately, the legendary Benin Bronze figures and sculptures were forcefully taken by the western imperialists and transported to Europe after an austere expedition during the colonial era, in 1897 to be precise. Brass, ivory and wooden objects numbering about three thousand were moved to the Western world, including over 1,000 brass plaques appropriated from the Oba’s palace. It is recorded that while a huge number of these art pieces were shipped off; some were “sold in the 1950s & 60s” and even till date are displayed in British Museums. The Benin Bronze figures are a significant cultural heritage in Nigeria. For instance, Nigeria used original mask head of the Queen Mother, Idia, during World Festival of Arts and Culture, FESTAC, in 1977.

In 2016, black Cambridge students demanded that the school authorities sent a bronze cockerel belonging to the ancient Benin empire back to the rightful owners.