These Scariest Animals Will Leave You Breathless – Never Knew They Even Exist! No matter how much we think we know in this world, there are myriads of things we are completely oblivious of. There are many unthinkable things out there that have never crossed our minds. Despite how much you travel round the globe, you may never get to see all the wonders deposited under this planet earth. You will find it difficult to believe the authenticity or possibility of some facts you come across in life. As some folks say; seeing is believing. That’s exactly the case of the strange and frightening animals species that will confront your sense of sight in this article. Just like me, I guess you never imagined the existence of such creatures! Have a look… The lesula (Cercopithecus lomamiensis) is a specie of Old World monkey in the guenon family, found in the Lomami Basin of the Congo. Though known to locals, it was unknown to the international scientific community until it was discovered in 2007 and confirmed in a 2012 publication. The lesula is the second new species of African monkey to be discovered since 1984. This monkey is described to have human looking eyes and a blue bottom. The Bergamasco is a breed of dog with its origins in the Italian Alps near Bergamo, where it was originally used as a herding dog. It is an alert, observant and patient dog breed with good self-control and balance. This breed is suited even as a guard and companion dog. The Bergamasco establishes close bond with his owner. This rare species of frog commonly found in India is much more bloated and round than its other frog counterparts. The Frog also has a small head and an unusual snout. It is so rare because it is said to spend only two weeks above the ground every year. The sea pig is closely related to a sea cucumber (whoever named sea creatures must have a sense of humor, since they never look like what they are named after). They have enlarged tube feet and live on deep ocean bottoms. Luckily, you’ll never run into one of these yourself. The Thorny Dragon is an Australian lizard that resides mostly in the desert and, as the name suggests, looks like a tiny dragon. They are also known as the mountain devil, the thorny lizard, or the moloch. This lizard is covered in sharp spikes, and it uses these to frighten away predators. They can live up to 20 years, more than most lizards. This is horrifying…Lampreys are somewhere between an eel, a leech, and a parasite. As you might imagine, they use those scary teeth to attach themselves to fish and suck out their blood. They’ve done this for around 360 million years. 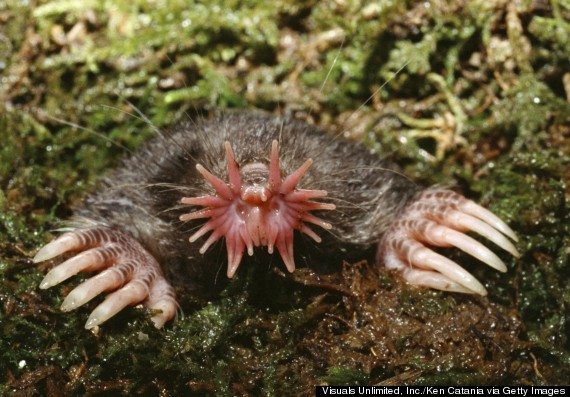 Native to North America are these strange moles with alien-like tentacles on their noses. Living most of their lives underground, these animals are a rare sight to humans as well as mostly blind. Their tentacles give them an extremely good sense of touch and can also detect the minute electrical fields given off by their prey. The aye-aye is a nocturnal lemur native only to Madagascar. The creature has rodent-like teeth which it uses to chew small holes into trees and then uses its narrow fingers to pull grubs out. The terrifying goblin shark measures between 8 and 13 feet and was first discovered in 1898. Referred to as a ‘living fossil,’ these terrifying animals are the only surviving member of a 125 million year-old family. Batfish are found in the waters around the Galapagos Islands, but cannot swim. Instead, the fish have learned to walk the ocean floor on their fins. The Goliath birdeater (Theraphosa blondi) is a spider belonging to the tarantula familyTheraphosidae. It is often considered to be the largest spider in the world. By leg-span, it is second to the giant huntsman spider, but it may be the largest by mass.

The Caquetá titi (Callicebus caquetensis), also known as the red-bearded titi or the bushy-bearded titi, is a species of titi monkey endemic to Colombia. Taxonomically, it is a member of the Callicebus cupreus group, following Shunsuke Kobayashi’s Callicebus grouping. It was first described by Thomas Defler, Marta Bueno and Javier Garcia in 2010.

This is too scary to be described or commented on! Or don’t you think so? Who the hell kept it on a red carpet? Baboons are not usually counted among the rare species of animals, but this particular one is quite different from the usual ones seen in the Game reserves around. It is stunningly scary! I call these ones GIANT PRAYING MANTIS. They are actually strange. Really looks like a kind of alien creatures. Whatever, they are actually in existence, right here in Africa. This is really a strange kind of fish. To me, it really doesn’t look like a fish. According to research, it exists not only in Africa, but also in other continents of the world. Not so much is yet known about this creepy creatures. Really disgusting…can’t continue the gaze! The lowland streaked tenrec (Hemicentetes semispinosus), is a small tenrec found in Madagascar. It is cute, but you have to watch out for this creature found in Madagascar, Africa. It’s covered in tiny little barbs and it is reportedly the only mammal known to use stridulation for generating sound. Usually, only insects and snakes make that kind of noise.