South Africa is one of the best holiday destinations in Africa, offering a highly diversified safari for your entertainment. However, your enjoyment would not be complete without having a taste of some South African foods.

South Africa foods are among the most nutritious in the continent and will not only excite your taste buds but will at the same time, provide more nourishment than you bargained for. Whether you are in South Africa or still planning to make a visit for one of your holidays, create a chance to grab a bite from some of the most amazing foods of South Africa we will share below.

From the meat stuffed dishes to the more conventional but highly customized diary South African foods, they will all give you a delicious memory to cherish for an entire lifetime. Answers Africa brings you some of the most amazing yet popular foods in South Africa. Chakalaka is a traditional Southern African food with an easy to prepare recipe that leaves you a lot of leeway for creativity. Make a gravy from chopped tomato and onion. Add plenty of grated carrots, chillies, garlic, a bit of grated cabbage, baked beans and/or cauliflower (diced). Cook until soft. Chakalaka is a classic relish of tomatoes, carrots, baked beans and chillies with hot curry powder that is served almost ubiquitously with every meal. Generally, in South Africa, Chakalaka is a required component for serving barbecues.

Potjiekos is a traditional and popular food in South Africa that is essentially a meat-and-vegetable meal of the Boers and although it resembles a stew, it is not and is not prepared like a stew. It’s slowly cooked in a three-legged cast-iron pot over coals. Even in the hands of a non-expert, potjiekos needs very little to no supervision and practically prepares itself.

Vetkoek is a traditional South African pastry. It is dough deep-fried in cooking oil and either filled with cooked mince (ground beef) or spread with syrup, honey, or jam. It goes well with Jam and Cheese. When done, it is crispy outside, then warm and fluffy inside. Vetkoek is one of the great South African foods that could easily pass for a dessert. Mealie is a maize meal that is frequently served on-the-cob or made into a beer. It forms part of South Africa’s staple food and a quick meal for the masses and those on a tight budget. Often times, it could be processed in the form of Mealie Pap which is a porridge made from ground maize and other grains. It can be served hot or cold with milk and sugar for breakfast or with meat and tomato stew for a complete meal. 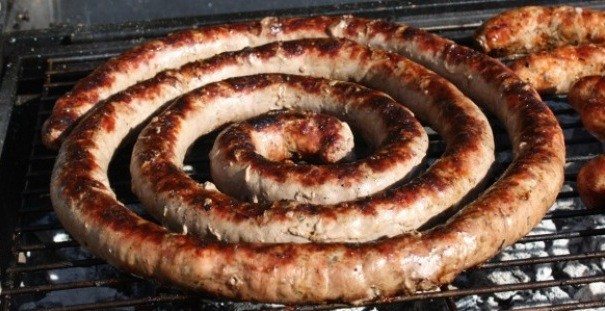 Boerewors is a type of sausage, quite popular in South Africa. It’s made with seasoned pork or from coarsely minced beef (sometimes combined with minced lamb, or both) and spices (usually toasted coriander seed, black pepper, nutmeg, cloves and allspice) and can be prepared mostly outside, grilled in an electric griller or baked in an oven.

Bredie is a heavily spiced stew incorporating meat (typically lamb) and vegetables. The most common variant of the bredie is the Tomato Bredie which is a traditional South African lamb, vegetable and tomato stew that tastes great especially for the winter. Call it the South African meatball and you are almost right. Frikkadel is a traditional South African food that is mainly made of baked, or sometimes deep-fried, meatballs prepared with onion, bread, eggs, vinegar and spices. The secret of a perfect Frikkadel is to mix the mixture gently with two forks, if you over mix you will most definitely have “cannonballs” instead. Sosaties is a traditional meat-based food in South Africa. The meat could be lamb or mutton which is marinated and skewered and barbecued shish-kebab style. cooked on skewers.

See: 10 Tanzania Foods You Must Eat Before You Die Bobotie is a South African food that may be prepared in many ways. The typical food is traditionally made of dried fruit, spiced beef or lamb and with an egg-based topping. It is the national dish of South Africa, similar to moussaka. It is also made with curry powder which gives this meal a slight ‘tang’ but a variety of flavours in this dish make this cuisine complex. The dry fruit such as apricots and raisins, mix with the meat and curry flavour very nicely. This is probably South Africa’s most popular and best-known food. Biltong is one of the South African foods similar to Jerky. It is a kind of cured meat, an air-dried meat (usually beef) that is savoured nearly everywhere by nearly everyone. Many different types of meat are used in its making, ranging from beef through game meats to fillets of ostrich from commercial farms. The typical process of preparation involves cutting strips of raw fillets of meat following the grain of the muscle. Flat pieces of meat could also be sliced across the grain.